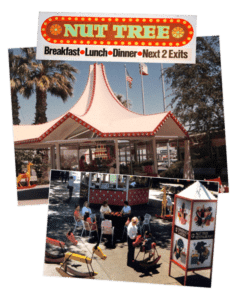 Vacaville Commons is proud to be a presenting sponsor of the Vacaville Museum Exhibit – Nut Tree Centennial.  Celebrating 100 Years of Fun, Food and Family.

In July of 1921, the Power family started a roadside fruit stand that would become California’s favorite road stop and put Solano County on the map for travelers all over the country. The Vacaville Museum exhibit honoring the 100th anniversary of the original Nut Tree – Nut Tree Centennial: 100 Years of Food, Family and Fun – is now open (through January 9, 2022).

The Vacaville Museum’s Nut Tree Centennial exhibit tells the story of the Nut Tree and the local family who, through a commitment to quality and innovation, created a world renowned “oasis of good taste” that was fit to serve the Queen, and did. The exhibit features all things original Nut Tree, including displays of the restaurant, retail shops and the Post Office. The colorful art of Nut Tree graphic artists, led by Don Birrell, are displayed throughout the exhibit.

The Museum exhibit gallery is open Thursday to Saturday, from 1:00 p.m. to 4:30 p.m. For guest safety, masks are required.  For more information about the Vacaville Museum and the Nut Tree Centennial exhibit, please call the Museum at (707) 447-4513.

The Vacaville Museum’s upcoming exhibit celebrating the centennial anniversary of Vacaville’s beloved original Nut Tree received a generous boost from Vacaville Commons who has joined the effort as the exhibit’s Presenting Sponsor.

“Along with providing a premier shopping experience to our guests, our mission is to give back to the Solano County community who so generously supports the Vacaville Commons and our stores,” says Linda Rusin, Vice President of Property Management for the Rodde Company who operates Vacaville Commons. “One of the ways we give back is by supporting organizations like the Vacaville Museum. The Vacaville Commons family looks forward to celebrating 100 years of original Nut Tree memories.”

Museum Executive Director Joanie Erickson, speaking on behalf of Museum members and trustees, appreciates Vacaville Commons for their leadership and sponsorship in celebrating the original Nut Tree Centennial. “We’re just so excited and grateful to partner with Vacaville Commons. They’re a wonderful community partner who is helping us bring back some wonderful memories.”

Vacaville Commons is one of Solano County’s premier shopping experiences, with unique local shops, eateries, and large retailers such as Target and Safeway. To learn more about the Vacaville Commons, and to check out their digital deals, log on to vacavillecommons.com.

For more information about sponsorships or other ways to help, please call the Vacaville Museum at  (707) 447-4513 or email Executive Director Joanie Erickson at director@vacavillemuseum.org.

And the Nut Tree was born. 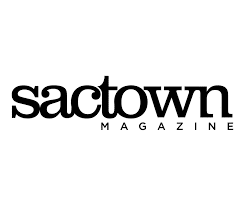 If you lived in Northern California any time from the ’50s to the ’90s, your memories likely contain vivid flickers of Vacaville’s Nut Tree—the roadside oasis that lured generations of kids and adults alike. Was it an amusement park so wondrous that even Walt Disney himself visited? Or was it California’s original farm-to-fork capital? Or a modern art and design mecca that was first to bring mid-century Eames furniture to the NorCal masses? It was all of that and more. It was also, as it happens, the creative vision of a group of Sacramento artists, designers, architects and, yes, candymakers. And now, in 2021, it’s turning 100. Let’s all jump on that miniature train—you know the one—and take a ride back in time for a Kodachrome encounter.

One hundred years ago this month, the iconic Nut Tree came to be.

Whether founders Ed “Bunny” and Helen Power ever envisioned their roadside fruit stand would become a vaunted tourist destination for locals and visitors from across the country remains to be seen.

Recalling ‘magical’ times at the Nut Tree, where details mattered

One hundred years ago this month, the iconic Nut Tree came to be.

As the history of Nut Tree marks its 100th year, three grandchildren of founders Edwin “Bunny” and Helen Power, all sisters, reflected on their work there while growing up.

All agreed the business not only imparted learned skills that benefited them as adults but also set modern, innovative standards for marketing, hospitality and locally sourced fresh food starting in the mid-20th century…

In July of 1921, the Power family started a roadside fruit stand that would become California’s favorite road stop and put Solano County on the map for travelers all over the country. The Vacaville Museum exhibit honoring the 100th anniversary of the original Nut Tree is now open to the public…

A History of Nut Tree

A longtime favorite roadstop for aviators and road-weary travelers in need of a break and a bite to eat, the Nut Tree has grown and changed dramatically from it’s humble beginnings as a roadside fruit stand.  Explore the history of California’s Legendary Roadstop…

VACAVILLE – Guess who’s turning 100 this year? Solano’s beloved original Nut Tree! In July 1921, the Power family started a roadside fruit stand that would become California’s favorite road stop and put Solano County on the map for travelers all over the country. 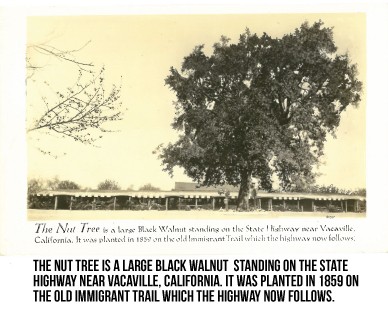 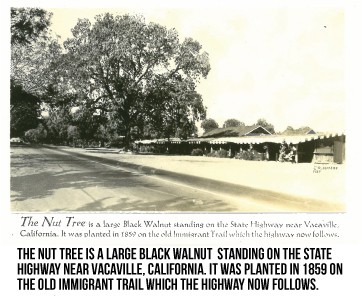 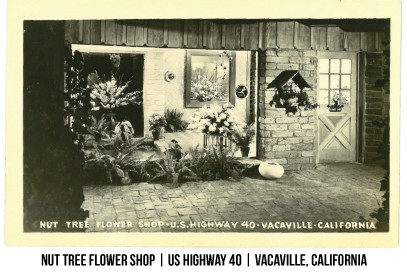 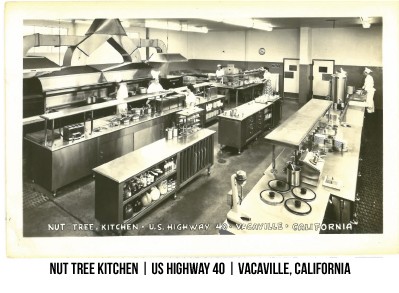 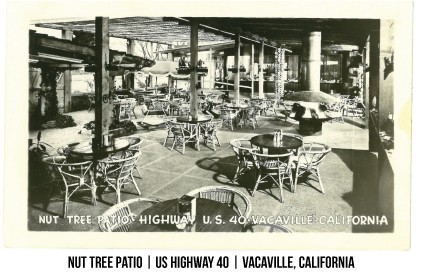 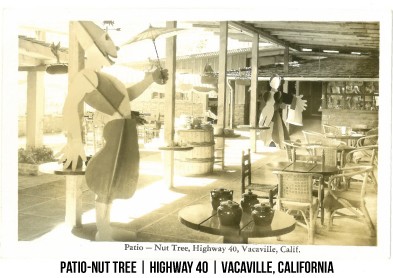 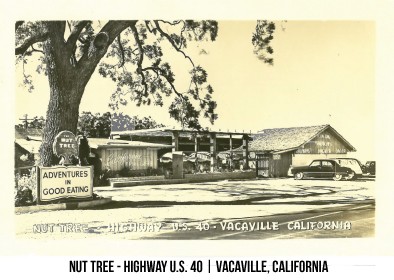 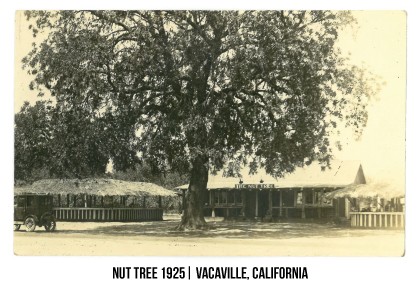 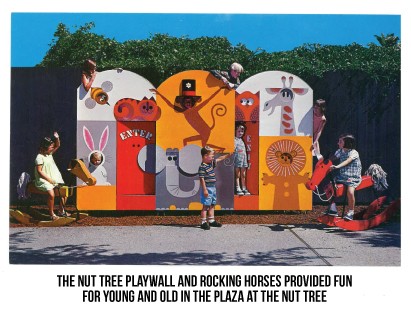 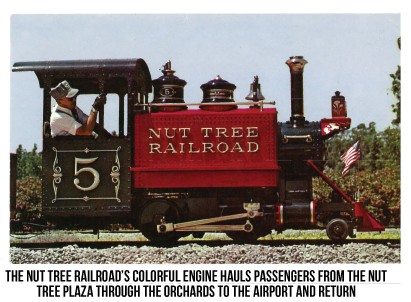 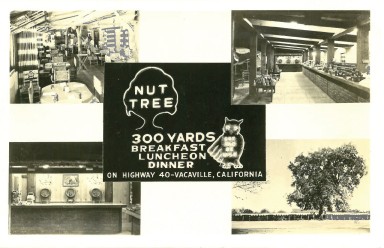 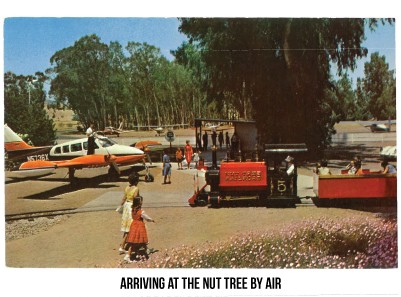 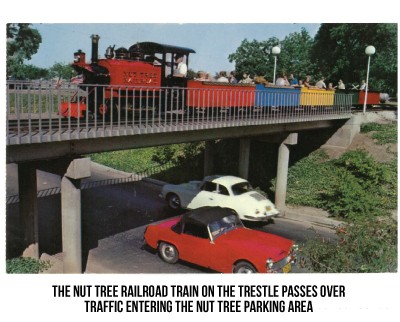 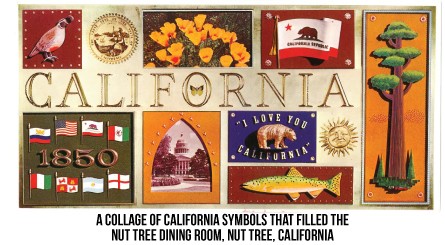 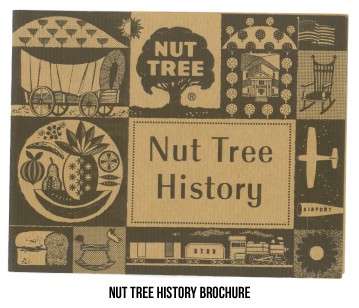 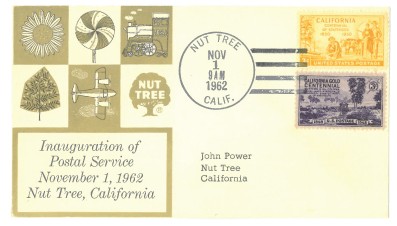 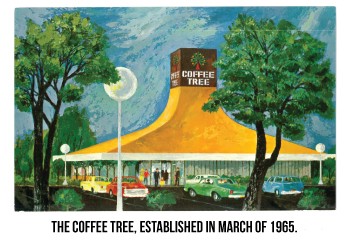 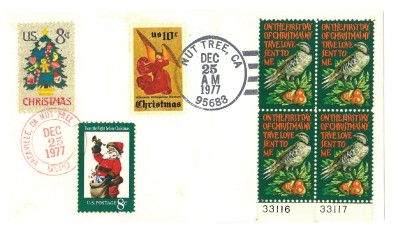 This website uses cookies to improve your experience while you navigate through the website. Out of these cookies, the cookies that are categorized as necessary are stored on your browser as they are essential for the working of basic functionalities of the website. We also use third-party cookies that help us analyze and understand how you use this website. These cookies will be stored in your browser only with your consent. You also have the option to opt-out of these cookies. But opting out of some of these cookies may have an effect on your browsing experience.
Below is a list of cookies currently used on this site as of August 25, 2020.
Necessary Always Enabled
Necessary cookies are absolutely essential for the website to function properly. This category only includes cookies that ensures basic functionalities and security features of the website. These cookies do not store any personal information. These cookies also store user decisions on whether or not user has opted-out of non-necessary cookies. Users cannot disable these cookies.
Analytics
Analytical cookies are used to understand how visitors interact with the website. These cookies help provide information on metrics the number of visitors, bounce rate, traffic source, etc.
Others
Other uncategorized cookies are those that are being analyzed and have not been classified into a category as yet.
Advertisement
Advertisement cookies are used to provide visitors with relevant ads and marketing campaigns. These cookies track visitors across websites and collect information to provide customized ads.
SAVE & ACCEPT
Powered by